This post is the second in the series of posts called PlantUML in Spacemacs. In this post we are going to see how we can create awesome Mind maps in Spacemacs using PlantUML. Mind map diagrams is the new feature recently rolled out in PlantUML and they are still in the beta* stage.

And you will find only minimal documentation in the official site related to mind map diagrams. This post gives you some additional bonus information such as adding colors to your mind map, creating high resolution mind maps and so on. You can find all these details in the Advanced Usage section in the bottom of the post.

If you want to know how to setup PlantUML in Spacemacs, please visit our previous post in this series.

Spacemacs is a community-driven Emacs distribution. It is a new way to experience Emacs with a sophisticated and polished set-up focused on ergonomics, mnemonics and consistency.

A mind map is a diagram used to visually organize information. A mind map is hierarchical and shows relationships among pieces of the whole. It is often created around a single concept, drawn as an image in the center of a blank page, to which associated representations of ideas such as images, words and parts of words are added. Major ideas are connected directly to the central concept, and other ideas branch out from those major ideas.

Although the term “mind map” was first popularized by British popular psychology author and television personality Tony Buzan, the use of diagrams that visually “map” information using branching and radial maps traces back centuries.

Mind maps in PlantUML support the org-mode syntax also, which means you can easily create mind maps if you know understand the standard org-mode conventions for outlining. This will be an added advantage for people who are already familiar with Emacs and org-mode syntax. 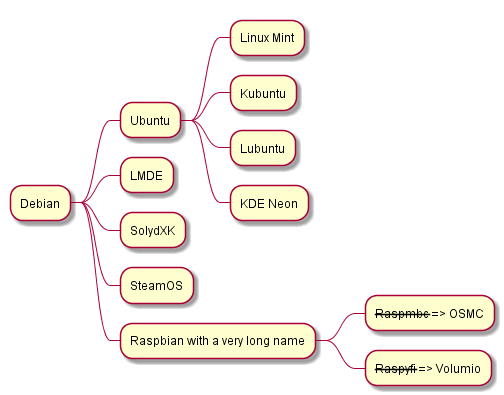 You can remove the box drawing using an underscore.

You can use the following notation to choose diagram side. 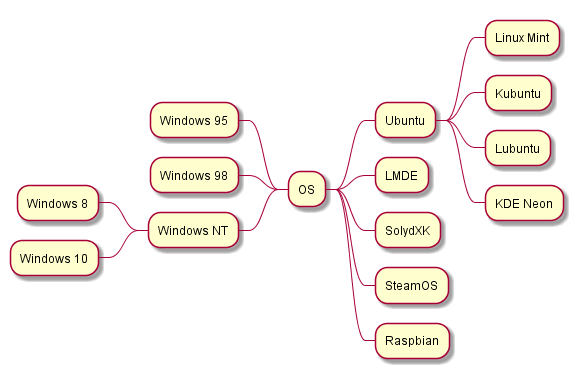 This syntax is compatible with Markdown.

It is possible to use both sides of the diagram.

Here is the complete example of a mind map with all the options which can be provided for your mind maps like caption, title, header, footer and legends. 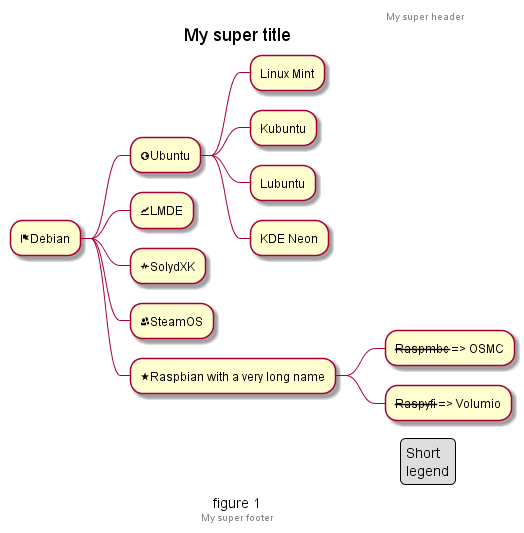 So far we have only seen the examples provided by the official docs for Mind maps in PlantUML. Now we move into more advanced usage like colors, style and other stuff which will be very helpful for people instead of boring monotonously colored mind maps.

First we will jump into the colors section which is my favorite one, because I want my mind maps to be more colorful because that was the original idea proposed by Tony Buzan in his book called The Speed Reading Book.

With PlantUML, you can use specify a color using any one of the below methods:

You can visit the official colors page in PlantUML for the list of color names you can use.

You can also change the entire background color of your mind maps other than the default white color using skinparam. skinparam is a command to change colors and fonts for the drawing.

You can use this command: 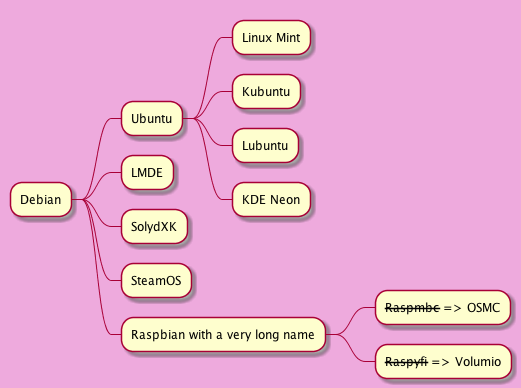 Changing color of each node

If you want to change the color of each of the nodes in your mind map tree, you can do so by giving the color option within each node like below. Again you can use any of the three options such as color names, short and long HEX values. 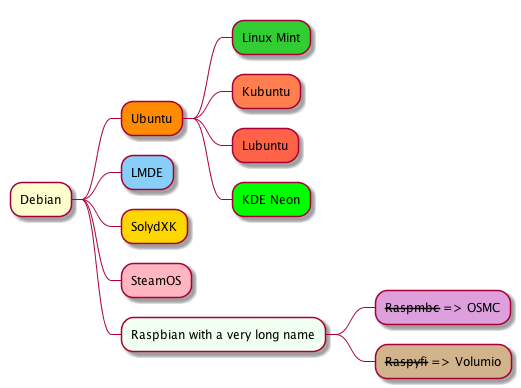 If you are a person who cares about the environment, who don’t want to waste the color inks in your printer, you can choose to generate your mind maps in monochrome version like black/white with the monochrome skinparam command. 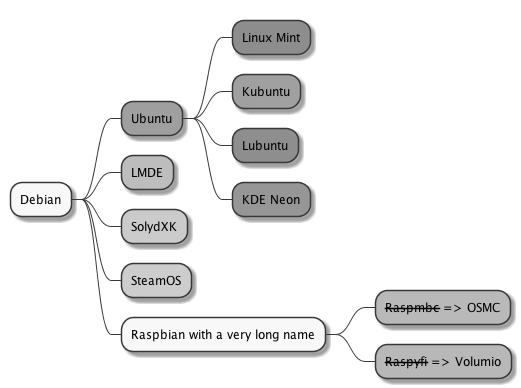 If you want your mind maps to look realistic or you are not comfortable with computer-generated mind maps, or you want a natural feel to your mind maps so that they will look like they are hand drawn, then you need to configure your mind map generation with the handwritten skinparam.

By default this property will be false and if you want handwritten style mind maps you can set it to true. 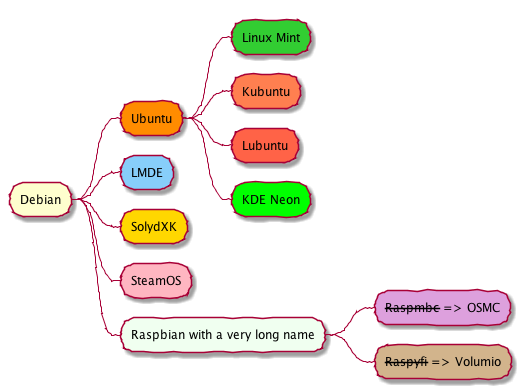 You can disable shadows from your mind map items with the option called shadowing. Again it is a skinparam command with a Boolean value. To disable shadows you need to explicitly set them to false. 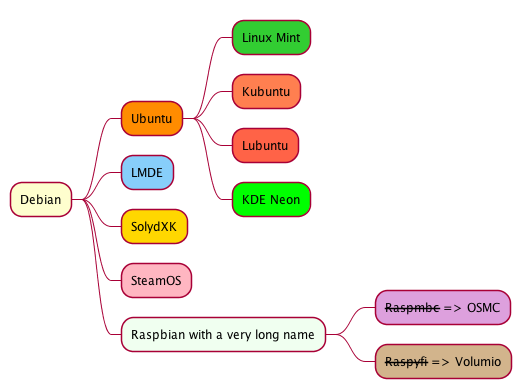 This option called dpi will come in handy if you want to take a print out of your mind maps and hang it in your favorite place so that you can take a look at them at your convenience.

DPI or Dots per inch is a measure of spatial printing or video or image scanner dot density, in particular the number of individual dots that can be placed in a line within the span of 1 inch.

For print material, the ideal resolution needed is 300 which you can set it via the dpi skinparam command. 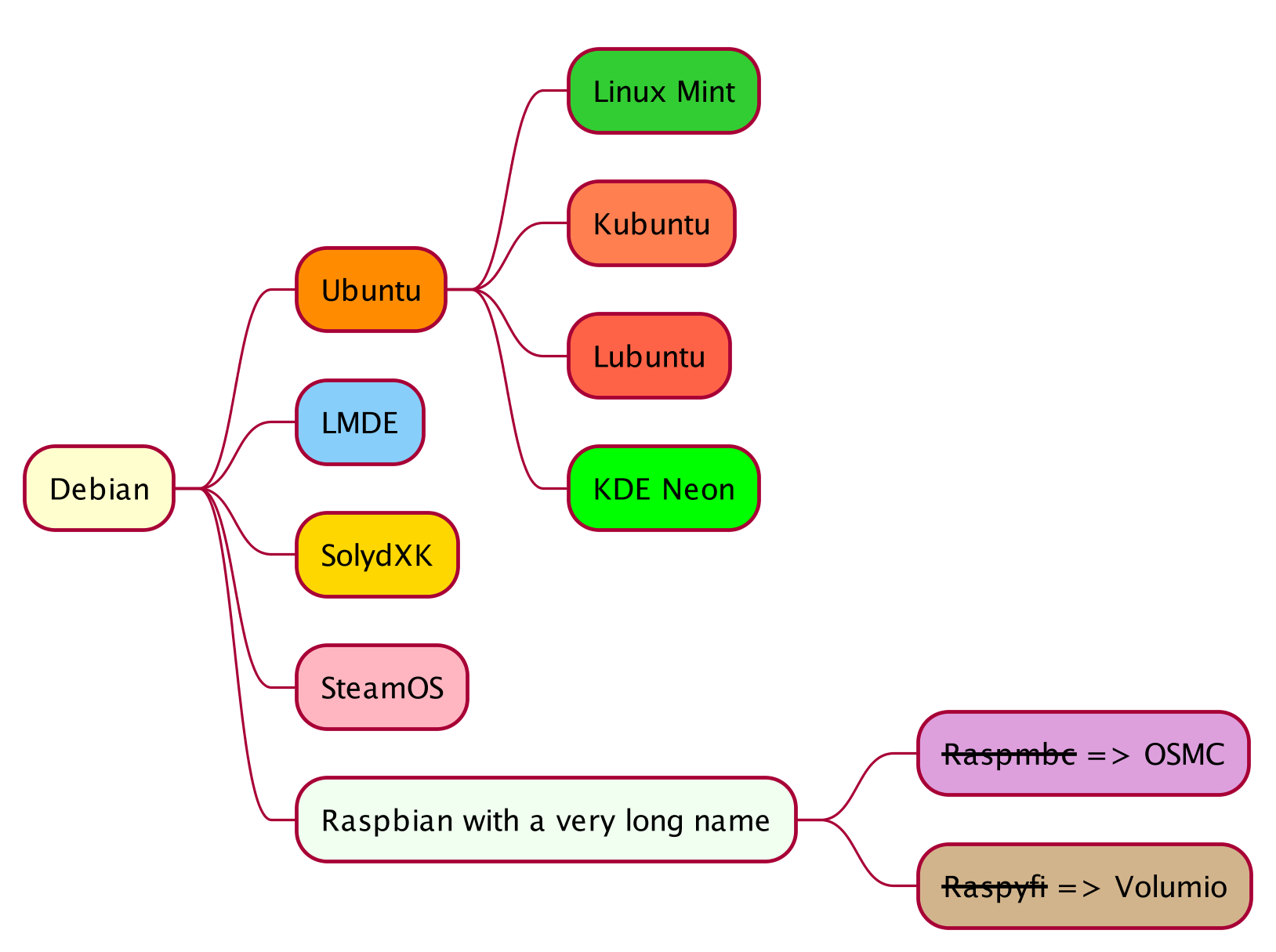 Hope you enjoyed the post and it will help you to create awesome Mind maps from within your favorite editor. Please let me know your feedback or queries in the comments. Stay tuned for more in this series on other cool stuff you can do with PlantUML.