Cohesion is the measure of strength of the association of elements within a module. Modules whose elements are strongly and genuinely related to each other are desired. A module should be highly cohesive.

1 Do you care about Cohesion in Javascript Functions?

The concept of cohesion has been largely superceded by the concept of abstraction at the class level, but cohesion is still alive and well as the workhorse design heuristic at the individual-function level. For functions, cohesion refers to how closely the operations in a function are related. Some programmers prefer the term “strength”: How strongly related are the operations in a function? A function like cosine() is perfectly cohesive because the whole function is dedicated to performing one task. A function like cosinetan() has lower cohesion because it tries to do more than one thing. The goal is to have each function do one thing well and not do anything else. via GIPHY The idea of cohesion was introduced in a paper by Wayne Stevens, Glenford Myers, and Larry Constantine (1974). Other, more modern concepts including abstraction and encapsulation tend to yield more insight at the class level, but cohesion is still a workhorse concept for the design of functions. Discussions about cohesion typically refer to several levels of cohesion. Understanding the concepts is more important than remembering specific terms. Use the concepts as aids in thinking about how to make functions as cohesive as possible.

Functional cohesion is the strongest and best kind of cohesion, occurring when a function performs one and only one operation. Examples of highly cohesive functions include sin(), getCustomerName(), eraseFile(), calculateLoanPayment(), and ageFromBirthday(). Of course, this evaluation of their cohesion assumes that the functions do what their names say they do—if they do anything else, they are less cohesive and poorly named. via GIPHY Several other kinds of cohesion are normally considered to be less than ideal:

To give this function better cohesion, the summary data should be reinitialized close to where it’s created, which shouldn’t be in the report-printing function. via GIPHY Split the operations into individual functions. The first prints the report. The second reinitializes the data, close to the code that creates or modifies the data. Call both functions from the higher-level function that originally called the communicationally cohesive function.

Temporal cohesion occurs when operations are combined into a function because they are all done at the same time. Typical examples would be startup(), completeNewEmployee(), and shutdown(). Some programmers consider temporal cohesion to be unacceptable because it’s sometimes associated with bad programming practices such as having a hodgepodge of code in a startup() function. via GIPHY To avoid this problem, think of temporal functions as organizers of other events. The startup() function, for example, might read a configuration file, initialize a scratch file, set up a memory manager, and show an initial screen. To make it most effective, have the temporally cohesive function call other functions to perform specific activities rather than performing the operations directly itself. That way, it will be clear that the point of the function is to orchestrate activities rather than to do them directly. 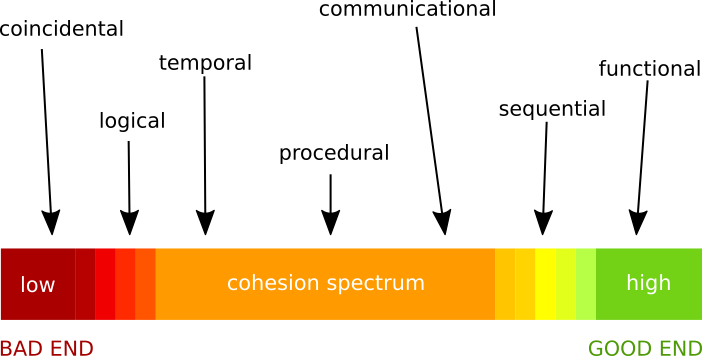 The remaining kinds of cohesion are generally unacceptable. They result in code that’s poorly organized, hard to debug, and hard to modify. If a function has bad cohesion, it’s better to put effort into a rewrite to have better cohesion than investing in a pinpoint diagnosis of the problem. Knowing what to avoid can be useful, however, so here are the unacceptable kinds of cohesion:

Procedural cohesion occurs when operations in a function are done in a specified order. An example is a function that gets an employee name, then an address, and then a phone number. The order of these operations is important only because it matches the order in which the user is asked for the data on the input screen. Another function gets the rest of the employee data. The function has procedural cohesion because it puts a set of operations in a specified order and the operations don’t need to be combined for any other reason. via GIPHY To achieve better cohesion, put the separate operations into their own functions. Make sure that the calling function has a single, complete job: getEmployeeData() rather than getFirstPartOfEmployeeData(). You’ll probably need to modify the functions that get the rest of the data too. It’s common to modify two or more original functions before you achieve functional cohesion in any of them.

It’s usually all right, however, to create a logically cohesive function if its code consists solely of a series of if or case statements and calls to other functions. In such a case, if the function’s only function is to dispatch commands and it doesn’t do any of the processing itself, that’s usually a good design. The technical term for this kind of function is “event handler.”

Coincidental cohesion occurs when the operations in a function have no discernible relationship to each other. Other good names are “no cohesion” or “chaotic cohesion.” It’s hard to convert coincidental cohesion to any better kind of cohesion—you usually need to do a deeper redesign and reimplementation. 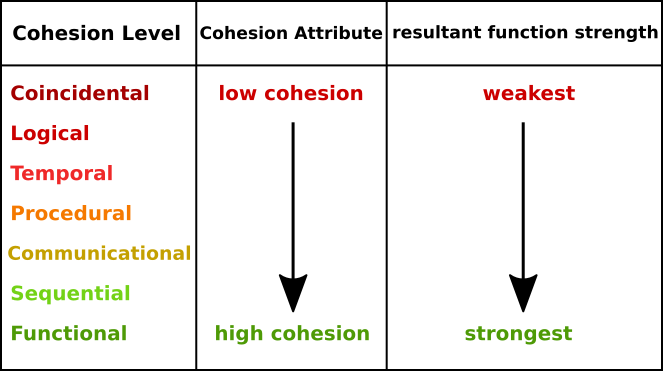